In the Name of the Robe 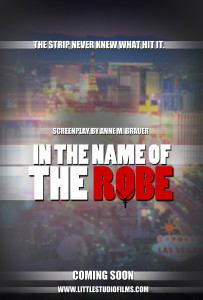 The brothers at the Abbey of Monte Manna can’t see to get much right, especially Brothers Goliath, Nugget, and White—all orphaned circus rejects dropped off at the abbey as kids. Now as grown men their abbey’s existence is on the line and they are chosen to help save the abbey. But after a mix-up at the airport and accidentally landing in Las Vegas, can these three monks woo Lady Luck and come back heroes?

In the Name of the Robe is a hilarious comedy screenplay in the vein of “Sister Act”.