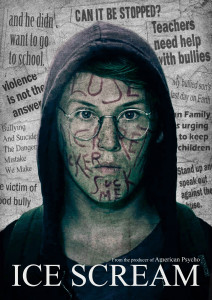 Little Studio Films shows the adverse effects of bullying with the recently completed thriller “Ice Scream” which is based on a known Italian short film, hoping to raise awareness of a growing behavioral issue that affects both kids and adults.

Yacovlef and Melocchi, who have been working together in Hollywood for two decades, and got their start in worldwide distribution and acquisition of American films for the international marketplace, have recently experienced, first hand, the effects of bullying. “The Internet and Social Media, while being very useful, can become an easy weapon used by bullies to try to discredit and shame the people they choose to prey upon, especially women and minorities, no matter the age” says Yacovlef. “I wanted this story told” says Melocchi, “and I hope that while trying to entertain with a main stream film, we can open a dialogue for people to come forth and ask for help”.

Little Studio Films is currently developing “Diamond Dogs”, aka “La Gang Dei Sogni”, a television mini series based on a book by Luca Di Fulvio about the first immigrants in America, which has been in best seller lists for several weeks in a row in Europe. The material has been adapted by screenwriter Anton Diether whose credits include the Emmy Nominated “Moby Dick” miniseries.

LITTLE STUDIO FILMS (www.littlestudiofilms.com) is a multilingual consulting and production partnership creating artistic synergies around the world.  They have several projects in development acquired from international artists and material.