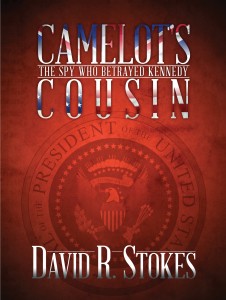 Little Studio Films is pleased to announce a collaboration with author David R. Stokes. They will be working on promoting for Film and TV adaptations his novel, Camelot’s Cousin, as well as his narrative non-fiction bestseller, The Shooting Salvationist.

Camelot’s Cousin is an espionage thriller set against the backdrop of the Cuban Missile Crisis and other famous events during the Kennedy administration. The discovery of a long-buried journal indicates that one of President Kennedy’s most trusted friends was actually a Soviet mole. Templeton Davis, a scholar and media personality becomes lost in an investigation and travels far and wide in his quest to unravel one of the 20th century’s greatest mysteries.

The Shooting Salvationist, distributed by Random House, is the real-life story of the Reverend Doctor J. Frank Norris. A powerful pastor, publisher, and broadcaster in the 1920s, Norris is the subject of one of the most intriguing and forgotten legal cases in American history after being charged with first-degree murder. Set in a post WWI world, the reader is taken into the courtroom as some of the most prominent legal figures of the day work to determine Norris’ fate.

“I’m thrilled about working with Little Studio Films. Alexia Melocchi has been extremely helpful and has a great gift for encouragement. The very thought that stories that have been buzzing around in my head, and that finally made their way into print, could one day be lived out large on the screen is the stuff dreams are made of. It’s an amazing thing to be able to explore your vision with other visionaries,” said Stokes.

Added producer Alexia Melocchi, “David Stokes is a masterful storyteller. He is able to transport us into historical events of our past with his extensive research on the subjects he writes about and the added emotion of his work and depth of his characters. He is a most welcome addition to our strong roster of best selling authors.”
To learn more about Stokes and his work, please visit his website.

ABOUT DAVID STOKES: David Stokes is an author, ordained minister, broadcaster, and columnist. His works have topped The Wall Street Journal lists and have garnered rave reviews.
ABOUT LITTLE STUDIO FILMS: Little Studio Films is a international company founded by Alexandra Yacovlef and Alexia Melocchi, devoted to discovering and nurturing new, fresh voices in film and television. They offer top services to help each client reach their goals. Little Studio Films  uses the combined experience, expertise, and connections of its team to provide top services to creatives seeking to bring their work to life. Besides production and development assistance, the company also offers marketing for high profile screenplays, books and film and television projects  and worldwide film distribution services.