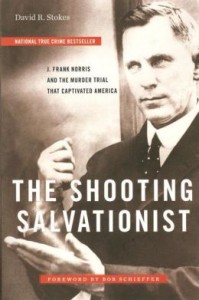 The Shooting Salvationist chronicles what may be the most famous story you have never heard. In the 1920’s, the Reverend J. Frank Norris railed against vice and conspiracies he saw everywhere to a congregation of more than 10,000 at First Baptist Church in Fort Worth, Texas, the largest congregation in America, the first “megachurch.” Norris controlled a radio station, a tabloid newspaper and a valuable tract of land in downtown Fort Worth. Constantly at odds with the oil boomtown’s civic leaders, he aggressively defended his activism.

Following the death of William Jennings Bryan, Norris was a national figure poised to become the leading fundamentalist in America. This changed, however, in a moment of violence one sweltering Saturday in July when he shot and killed an unarmed man in his church office. Norris was indicted for murder and, if convicted, would be executed in the state of Texas’ electric chair.

At a time when newspaper wire services and national retailers were unifying American popular culture as never before, Norris’ murder trial was front page news from coast to coast.  Set during the Jazz Age, when Prohibition was the law of the land, The Shooting Salvationist leads to a courtroom drama pitting some of the most powerful lawyers of the era against each other with the life of a wildly popular, and equally loathed, religious leader hanging in the balance.

Little Studio Films is developing the book into a mini series for Television in partnership with David R. Stokes.