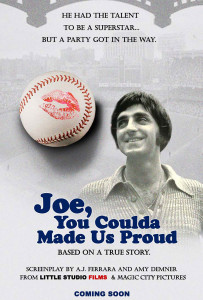 The story follows Pepitone’s search for the love and acceptance he never received from a nurturing yet abusive father and down a path of self-destruction through sex addiction before there was such a term. The Brooklyn born high school star signed with the Yankees at age 17, blessed with talent that led to comparisons to Mickey Mantle and Joe DiMaggio.  But Joe’s insatiable need for a party every night throughout the 60′s and 70′s spiraled down a dark path in the company of the likes of Frank Sinatra, Tom Jones, Mickey Mantle and key figures in the New York mob that would ultimately ruin is career, his finances and two marriages. “The story is both hilarious and heartbreaking as Joe realizes it’s too late to save his career but not too late to salvage his life. Its tone and style is very much ‘Major League’ meets ‘The Wolf of Wall Street,’” Mr. Ferrara said.

Alexia Melocchi and Alexandra Yacovlef are industry veterans, having sold over 100 American movies for theatrical international distribution clients through their company Axelia International Pictures. Little Studio Film’s mission is to create a bridge between the international film community and American talent. Little Studio Films two most recent projects are the soon to be released “Stealing Roses” and “Ice Scream.”

“We are very excited with the potential of global interest of this movie project and the storytelling of Joe’s life.  Even though Baseball is an All-American Sport, the global marketplace is hungry for personal stories of sports heroes overall, because it reveals their humanity and life struggles that everyone can relate to and identify with,” says Ms. Melocchi.

A.J. Ferrara’s feature film screenplay “Invasion,” along with its companion TV series “Majestic-12,” have been optioned, with Mick Garris (Bag of Bones, Pretty Little Liars) attached to direct and The Wolper Company attached as co-producers with Little Studio Films. Ferrara is co-writer on the upcoming action feature Galleon, to be produced by Little Studio Films and Pitcher Point Productions. The Pepitone movie adaptation will be written by A.J. Ferrara and Amy Demner.